How Thanksgiving Became A Tradition In America

Perhaps, like myself, you’ve gotten curious about how Thanksgiving came to be. We all know the stories we learned in elementary school, about the Pilgrims celebrating the first Thanksgiving with the American Indians.

Presently, we celebrate by serving turkey (and crafting turkeys! Remember all the different ways our teachers came up with constructing turkeys for us to create through the years?), we dine on stuffing, mashed potatoes and gravy, pumpkin pie, and I can’t forget the unusual family favorite, cranberry sauce.

But my curiosity ran deeper than that. When WAS the first Thanksgiving? What was it REALLY like? Did the Pilgrims dress like the images we depicted in our drawings? With the women in matronly dresses wearing the bonnets on their heads? And the men with formal three piece blue or gray suits and wearing tall hats?

I was out to find the TRUTH. What really happened all those years ago? So I Googled “The history of American Thanksgiving,” which of course, brought back thousands of hits.

I sought out, what I felt, were reputable sources, the History Channel and MayflowerHistory.com and with pen and paper in hand, began feverishly writing down what I found. According to them, the first Thanksgiving occurred in 1621 with the Wampanoag Indian Tribe.

It was a celebration of an abundant autumn harvest where the Wampanoag had given lessons to the Pilgrims on how to enhance their crops growth. Some of the crops, according to written account by William Bradford, the governor at that time, were wheat, barley, peas Indian corn and another variety called flint corn. But contrary to our present meals including mashed potatoes and gravy, potatoes had yet to be introduced to the colonies.

The meal was also rich in fruits and berries, from mother nature’s own harvest. As far as the plentiful types of meats which were served, of which turkey was one of them, there were also multiple types of fish, mussels, lobster and a variety of water fowl. Another type of meat which was served was venison, or the meat from the deer.

It’s interesting to me how of all of the large variety of foods served in 1621, our traditional Thanksgiving meals are typically comprised of turkey dinners.

Also, as it turns out, this first Thanksgiving didn’t go by that name, and it also wasn’t an annual event. It wasn’t until almost 200 years later, in the mid 1800’s, that it became celebrated annually in a just few of the state’s and colonies. And it didn’t have a preset annual date, like we have now.

It came after particularly great fall harvests. Some of our presidents, such as George Washington, John Adams and James Madison called for having a day of Thanksgiving, but once again, the celebrations were sporadic.

But it was a woman named Sarah Josepha Hale, the author of the classic poem “Mary Had a Little Lamb,” who relentlessly devoted 36 years of her life writing letters to various large newspapers in the 1800’s and letters of request to every president elected and reigning in that time, pleading for a day of thanks to be annually celebrated in honor of that first meal in Plymouth, Massachusetts in 1621.

It was President Abraham Lincoln who finally took her words to heart and in 1863 made Thanksgiving a national holiday. His hopes, at the time, were to bring together all of America’s citizens during the dreadful times of the Civil War. It wasn’t until much later that the last Thursday in November was the date to be devoted to the holiday.

The Story of Squanto – The Real Giving

As I delved in farther to the history of Thanksgiving, I found a website created by the Manataka American Indian Council giving their own account of that first Thanksgiving almost 400 years ago and their depiction is dramatically different in many ways. They write about the Pilgrims bringing the small pox virus to their land, in which a good many of the Indians couldn’t survive. The Pilgrims, believing they were coming to a new free land, where they would be able to stake their claims to land where ever they pleased, actually brought on wars which slaughtered many more of the American Indian tribes… And much of those who did survive were allowed to live only to become slaves to the Pilgrims. 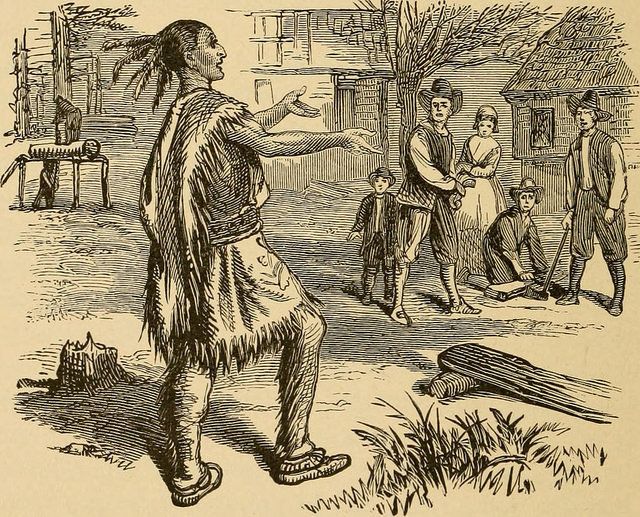 But there was one Indian in particular named Squanto, who came to learn the English language, taught many of the Pilgrims what he knew about hunting, fishing, and growing an abundant harvest. And it was Squanto who initiated and and brought together the new people of their land and the Wampanoag Indians with a treaty. It was following the first full year of honoring this treaty that the Wampanoag and the Pilgrims celebrated by giving thanks.

The account given by the Wampanoag does continue to tell the stories of boatloads of new settlers coming to the new country creating havoc by taking over the Indian’s land and enslaving many. As you can see, this side tells a vastly different story than that of people like William Bradford’s account and I’m curious to know who’s account is more accurate? Perhaps it was somewhere in between?

At any rate, these days, Americans celebrate Thanksgiving by honoring the people and occasions in their lives they’re grateful for. The majority of families celebrate by bringing extended families together and sharing the traditional turkey dinner. Everyone eats way too much food causing them to loosen their belt buckles or simply undo the snap of their slacks (as for me, I learned a long time ago to wear pants with an elastic waistband to our Thanksgiving meal).

Many of us even perform the ritual of going around the table and enjoying listening to each person recite some of the things their thankful for. Another traditional event which happens every Thanksgiving is that the television is almost always turned on as everyone’s eyes are glued to their sets watching a full day of football.

Americans also celebrate this day every year with parades. Cities and towns big and small, across the country bring communities together with a parade full of floats, in which volunteers work extremely long hours to create something new and innovative. They’re built on trailers of various sizes and pulled by cars, trucks, motorcycles, tractors…

Some are even built right atop these vehicles. High school marching bands march along in formation, rock, jazz and other musicians play, sometimes marching along, sometimes having their instruments and microphones set up upon flatbed trailers. You can find clowns often tossing candies to the children, Future Farmers of America groups, and veteran groups marching with pride, I’ve even seen bagpipes and fife bands. You might find people walking on stilts, riding on unicycles, and who knows what else!

You never know what fun and interesting groups each community has to offer. But I can promise you a great experience. If you’re not from America, and are contemplating a visit, during the Thanksgiving holidays is an awesome time to do it. Please, come and experience how the city or town and family your visiting, celebrates this American historical holiday.

Each will offer you a local parade they’ve made uniquely their own, a delicious and filling meal, and after dinner, you get to kick back in a recliner, let your very full stomach settle from all the food you just ate, and watch how maniacal we Americans can get as we watch our favorite teams vie together in the football game on television. And just when you think the meal is over and there’s absolutely no way you possibly eat another bite… a plate of pumpkin pie appears in your hands, and surprisingly you eat a little more.

If you’re from America, I’d love to hear about how your family celebrates Thanksgiving, and those from abroad, I’d also love to hear from you too. Does your country or culture have a holiday inspired by giving thanks for what you have? What time of year is it celebrated and how?

I’m so incredibly curious to learn about how different families, different countries and different cultures come together and celebrate. Please feel free to write about it to me in the comment section below.

Janie Saylor is a professional certified life coach with a degree in psychology, her focus is in the emerging field of positive psychology. Janie is the mom of two grown children, her son, age 20, and her daughter, age 24. In 2006, Janie published a book, “The Road You’ve Traveled, How to Journal Your Life,” which came from her experiences teaching life journaling to people over the age of 60 for 10+ years in many different communities in the Metro Detroit area. Janie’s used her experiences and education as she developed an 8-week online coaching program and has had tremendous success in improving the communication, lives and relationships of her clients. Janie enjoys uplifting others with positive posts and memes on her Facebook page, Become University. Janie calls it “Your Happy Place.”