This day marks the anniversary of India, my country officially becoming a republic. Every year, just after welcoming a new year we Indians gear up for a bigger celebration on the 26th of January. On this day our new constitution came into effect giving each citizen ,across all religions and cultures equal rights.

On 15th August 1947 India gained its much awaited independence. With this breath of freedom started the building of a new nation. A nation that would be by the people and for the people.

The first step in taking our country forward was the formation of a committee to draft a permanent constitution for new India. After 3 years of deliberation and modifications the bill of new constitution was passed by the assembly of 308 members on the 24th January’1950.

Two days after that, on 26th January 1950 India was declared a secular and democratic state.

WHAT IS A REPUBLIC?

A Republic is a state in which the supreme power lies within the hands of the people. The citizens have the right to elect their representatives and the state is headed by an elected leader.

The diversity and beauty of India is mostly due to this one act that was passed 3 years after our independence.

A constitution that firmly states

“No matter what your religion, social status, financial standing, physical state or appearance. All men and women who are citizens of India will have equal rights under a common law.”

The strength of a republic state lies in the fact that it bestows the power to elect its leaders to the masses.

This day is marked across the country by flag hoistings, cultural programmes and distribution of sweets. I still remember in our school days 26th January meant a day of celebrations.

After the customary flag hoisting and national anthem all the students would proudly present cultural programmes and eagerly await the distribution of sweets.These celebrations have played a pivotal role in building a feeling of national pride.

Over the years the mode of celebration might have changed but the feeling still remains the same. 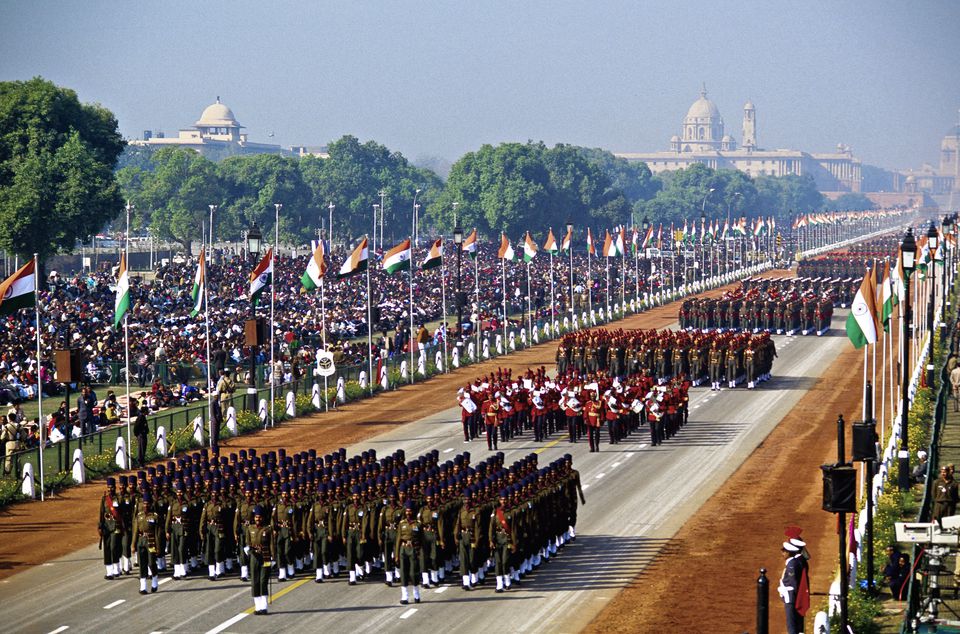 The main celebration is held in the national capital , New Delhi, along the Rajpath, past the India Gate.

Also the defense forces showcase their advanced achievements and their bands march past in all finery and grandeur.
Every year India invites a foreign state of head to be the Chief Guest for the occasion. The parade also showcases 12 contingents of para-military forces and civil forces.

All the Indian states showcase their cultural and social heritages in the form of beautifully decorated floats.

Around 1200 School Children present many cultural programs as part of the parade.

This parade is not just a celebration it also honors our national heroes and martyred soldiers. The president presents many gallantry and bravery awards on the occasion.

The grand parade is a much awaited event every year, which is broadcast live on Television and is watched by millions across the country.

The Indian republic day celebration lasts for 3 days and the beating retreat is an official ceremony that marks the end of republic day festivities.

It is held on the evening of 29th January performed by the bands of all three wings of the military. The chief guest , the President of India , is given the national salute, followed by the playing of national anthem.

I can still recall how my grandfather would sit through the live telecast of the beating retreat and watch the whole ceremony with great pride.

For us children Republic Day celebrations end on the 26th of January ,but for him it always concluded with the beating retreat at the presidential palace, The Rashtrapati Bhavan. This date has a historical and patriotic importance for the Union of India, being as important a day as the day of our independence.

26th January is not just a date, for Indians it is a day that resonates as India.

Where the mind is without fear and head is held high
Where knowledge is free.
Where the mind is led forward by thee
Into an ever widening thought and action
Into that heaven of freedom my father let my country awake”

These famous lines by Rabindranath Tagore remain close to my heart ever since I read this poem in school.

Independence marked the birth of my nation, but becoming a Republic and coming under a common code gave us equal rights and opportunities to take it forward into a new and beautiful dawn.

Shalini Tyagi is an Indian,born and brought up in India,currently living in Dubai. She is mother of two school going children and is a stay at home mom. An avid reader, she has recently forayed into blogging to bring to light her writing skills. She hosts her own website tyagishalinid.com.